Sustainability has never been a bigger issue in our society than now. Numerous reports state that we only have twelve years to halt catastrophic climate change, with disastrous effects seen all over our planet through deforestation, animal extinction, and rising sea levels. It’s no secret that we need to cut our carbon dioxide emissions, and limit any future global temperature increases to 2 degrees Celsius – but preferably not more than 1.5 degrees – to limit the damage.

In the world of energy and utilities, potential green solutions often come in the form of renewable power. A sharp focus has been put on nuclear power in the UK in recent years, along with offshore wind power, which is said to have the capacity to replace nuclear power here, following the regular shutdowns of nuclear power plants. Big corporations are also starting to have the spotlight shone on them, both by environmentalists and the government, along with – more recently – the general public. Surveys often show that consumers would rather spend their money with organisations who are conscious of their environmental impact, and who are taking active steps to become more sustainable.

With this in mind, it’s no surprise that restaurants in particular have upped their green efforts, especially following the creation of the Sustainable Restaurant Association (SRA) in 2010. The SRA works with all kinds of eateries, from high street chains to Michelin-starred restaurants, basing all action on three pillars: sourcing, society and environment. By focusing on these three areas, the SRA encourages its members to work towards sustainability in every way possible.

Nando’s is a high street restaurant chain who have been making waves in sustainability circles recently. A couple of years ago, they opened their first “fully sustainable eco restaurant” in Cambridge which ticks multiple boxes on the green checklist. It operates entirely on renewable gas and electricity – 90% of which is bought in, and 10% of which comes from 97 solar panels on the site. Even the building materials themselves are sustainable, including a responsibly sourced timber frame (with a carbon footprint 80% lower than standard building materials), an insulated roof, and reclaimed and recycled furniture. Nando’s hopes that this restaurant will lead the way for other new builds they have on the way and that these practices will become the norm for other restaurant chains too. 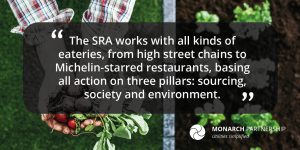 Another restaurant making significant change is Wahaca who are officially certified as a carbon neutral company. They have reduced their energy consumption by 36% at their new sites, and by 15% at their older sites. This is done by making a combination of improvements, including upgrading systems and appliances, and installing small-scale heat networks within their restaurants. Further to this, all of their food waste is converted into biogas and liquid fertiliser, and they source most of their food locally to reduce carbon emissions that would have come from imports. It’s clear to see that Wahaca are leading the way in sustainable operations, and their net zero carbon footprint is proof of their hard work.

A third and final SRA member up for discussion here is Wagamama. Incredibly, Wagamama runs all of its restaurants entirely on renewable energy, as well as making their own bio-diesel fuel from 1 million litres of used oil each year. They also recycle their leftover food with an anaerobic digester which turns it into green energy to power their LED lights, meaning that absolutely nothing goes to waste. Moving away from energy, Wagamama have begun to utilise low-flow devices to detect when more water is needed in certain parts of their restaurants. This focus on all areas of utilities is great to see, especially as water is often neglected in sustainability plans. Wagamama’s innovations have helped them to save 28 million litres of water and have reduced their electricity consumption by 10%.

It’s not only chain restaurants who are taking steps towards greener operations. Olive Magazine looked into the most sustainable independent restaurants around the UK and presented the methods each of them employs to achieve sustainability. Restaurant Sat Bains in Nottingham experimented with cooking at lower temperatures in order to conserve energy. They also had an on-site energy audit conducted to identify areas of high energy use, and installed LED lights and energy-efficient appliances. The Gallery in Barry, South Wales also installed LED lighting throughout the building and relies on cross ventilation instead of a traditional extractor fan. All of the restaurants featured by Olive source their ingredients locally in order to reduce carbon emissions from transportation, and most of them have flexible menus to fit in with seasonal food supplies.

Battlesteads in Northumberland has a carbon neutral heating system, Devon’s Café ODE serves up food on compostable cardboard trays instead of plates, as well as having solar powered heating and lambs’ wool insulation. The list of these green initiatives is extensive and even covers specific cooking methods, grey-water collection schemes, and restaurants growing their own ingredients. Although chain restaurants are obviously able to have a more far-reaching impact, the sustainability efforts of independent restaurants are arguably more impressive. There’s no head office or marketing team telling the owners what to do, or any specific instructions on how to operate. The owners of independent eateries decide to become sustainable on their own, and it’s up to them to push it through. The list provided by Olive really highlights how initiatives like this can bring local communities together, and it’s so wonderful to see how local people and businesses can actively make a difference to our environment.

There are multiple benefits that come from making the types of changes we’ve talked about in this article. Generally, it involves reducing your consumption which, in turn, cuts the costs of your energy bills. It also means that you produce fewer CO2 emissions which is crucial for the environment and the global warming issues we face in today’s society. Having large chain restaurants onboard with such great sustainability initiatives is sure to pave the way for other companies to follow suit. We have seen that smaller restaurants are also operating in ways which will benefit the environment and local communities. Demonstrating their social and environmental consciousness is also a way of boosting reputation amongst a restaurant’s customers, potentially leading to better profits.

We are currently working with several restaurant chains to help them reduce their energy use and CO2 emissions. Get in touch with our sustainability team today to start your green journey!