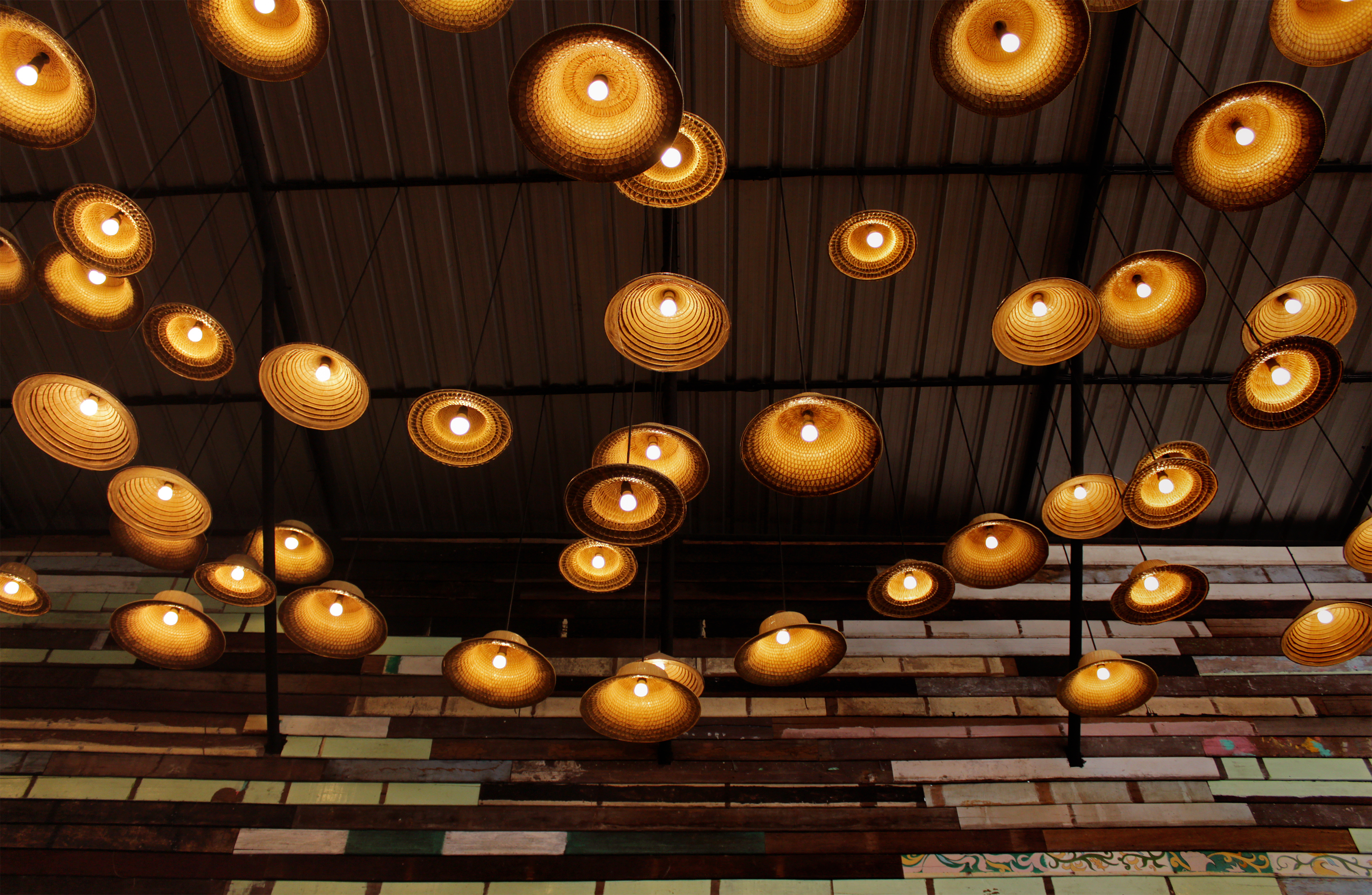 Small UK energy suppliers have boomed over the last decade, with only 11 in 2008 jumping to over 80 today. Since the start of 2018, nine energy firms in the UK have crashed. The most recent of these were Economy Energy and Our Power last month, leaving their respective 235,000 and 31,000 customers in the capable hands of Ovo Energy and Utilita Energy. When an energy supplier collapses, Ofgem is responsible for moving the customers over to another supplier by a process called Supplier of Last Resort (SoLR). This process is usually completed very quickly and Ofgem’s “safety net” ensures that no one will be left without an energy supply. In the last year, more than 1.2 million customers have been moved by SoLR, a move which has changed up the energy supplier game. Ovo Energy now is the seventh largest domestic supplier, just outside the Big Six (made up of British Gas, EDF Energy, E.on, npower, Scottish Power, and SSE) which supply almost 95% of the market themselves.

Generally, when allocating new suppliers via SoLR, Ofgem tends not to involve the Big Six. Only Sottish power took on Extra Energy’s customers back in November 2018, and it’s clear to see that this technique allows other smaller suppliers, such as Ovo, to grow – potentially levelling out the playing field. Transferring customers, however, can be an expensive business, and Cornwall Insight estimate that 2018’s crashing events may have cost UK households up to £2.50 each. The new supplier, appointed by Ofgem, is allowed to claim any costs of the transfer process back from the market, so the only people losing are domestic energy customers up and down the country.

How stable is the UK energy industry?

Gary Huish, director at Energy Potential, suggests that the recent collapses are because smaller energy suppliers “fail to grasp the basics of risk management”. They sell fixed-price tariffs and hope to make a profit in this way, but there’s no guarantee. The energy markets, due to a combination of factors, are becoming increasingly volatile and can hit smaller suppliers with costs that can’t always be recovered from their fixed-tariff pricing structures. Wholesale fuel costs aren’t reliable, and climate change brings inconsistent seasonable patterns and higher weather risks. Huish also cites the increasing popularity of renewable energy as a market disruptor, with its unpredictability making it more difficult for analysts to generate competitive year-ahead prices.

Colin Crooks, chief executive of First Utility, defends suppliers’ increasing energy rates claiming that First Utility and other suppliers “absorbed a lot of the extra wholesale cost for a long time” before transferring these costs to customers’ bills. Just as with any business, the wholesale cost of the product – in this case energy – eventually has to be reflected in the final price for customers, otherwise businesses – or suppliers – can’t operate sustainably.

Ultimately, the widely-held belief is that without factoring in risk properly by adding a fair margin to the customer, a supplier cannot be thoroughly prepared for increases in wholesale fuel costs. Smaller suppliers have fewer resources – both in terms of finances and man-power – which could hinder their attempts to hedge risks effectively. These shortfalls are likely to be the main factors leading to their eventual collapse.

Another one bites the dust

The Big Six dominate most of the domestic UK energy market and it can often be difficult for smaller suppliers to stand out amongst them. This makes it difficult for them to build their own customer base, so they attempt to draw people in with energy prices which are almost too good to be true. Smaller suppliers often offer tariffs which would end up as loss-makers, but they increase the charges shortly after customers join them, in order to make a profit. This arguably dishonest practice has led many customers to become unhappy with their smaller suppliers and switch back to larger suppliers for more stable prices and better customer service.  A BBC report found that smaller suppliers often have struggled to deal with queries and complaints, after growing too quickly, taking on thousands of customers, and then not having the staffing structures in place to meet customer demands. 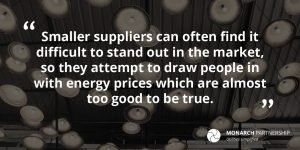 Where does the price cap come into all this?

Ofgem’s famous price cap came into force on the 1st January 2019. It ensures that suppliers can charge a typical dual fuel customer no more than £1,137 a year (if bills are paid by direct debit), mostly protecting customers who “have remained on the same deal for years, rather than those who have shopped around”. Previously, the Big Six had some customers on cheap fixed tariffs, and others on expensive default tariffs which would be used to cross-subsidise the lower rate deals. The implementation of the price cap doesn’t allow suppliers to do this anymore and ensures that customers only pay for the energy they actually use, promoting a fairer system of billing across the industry.

One drawback, however, is that the cheaper tariffs on offer will cease to exist, as suppliers have no means of making up for the losses here now that the cap limits their higher prices. Suppliers make, on average, around £50 profit a year from each customer, so prices may have to start levelling out across the board if expensive tariffs are no longer in place.

What about the B word?

Unpredictable markets and rising energy prices are exacerbated by something which has been dominating UK politics and media for the past three years – Brexit. UCL conducted a study into Brexit’s impact on UK energy prices – even before the big departure has taken place – and found that household bills have risen by £75 since 2016. Further to this, with a no-deal Brexit looming on the horizon, future of the UK’s energy supply come March 2019 looks uncertain. At this stage, nothing seems to be set in stone, and nobody knows exactly what will happen to the pound which, of course, will impact how expensive foreign fuel imports will be. Only time will tell exactly how Brexit will affect the energy industry, but if this is something you’d like to read more about, head over to our analysis of the current situation.

Predictions for the future?

Ellen Fraser, energy analyst at Baringa Partners, predicts that higher winter fuel costs might lead to a further ten smaller suppliers collapsing over the coming months. Wholesale prices are also predicted to continue to rise, so when small suppliers buy the energy upfront, they may not be able to survive financially before they sell it to customers at a later date.

The future of the energy industry may start to rely more on automatic switching services, which already exist and are growing in popularity all the time. These automatically move customers to another deal – potentially with a different supplier – when their current tariff ends. The BBC, however, points out that new tariffs are ranked purely on price, and not by the level of service or customer satisfaction of the supplier. Smaller suppliers often, as previously mentioned, have worse rates of customer satisfaction, but they tend to perform better on automatic switching sites, due to their typically lower prices. Could this new trend of automatic supplier swapping lead to small suppliers becoming overwhelmed by an influx of new customers?

Ofgem has recently announced tighter regulations for new suppliers entering the market. Companies will now have to prove that they have “adequate financial resources” before they can begin supplying energy to customers. This hopefully will mitigate any negative effects on customers from suppliers who aren’t fully prepared for the conditions of the UK energy market. Uncertainty caused by Brexit, Ofgem’s price cap, and continually rising wholesale prices are all contributing to mounting difficulties for smaller suppliers. To keep the market competitive, consumers are being encouraged to switch providers and it is hoped that the rate of supplier collapses will slow over the coming years.